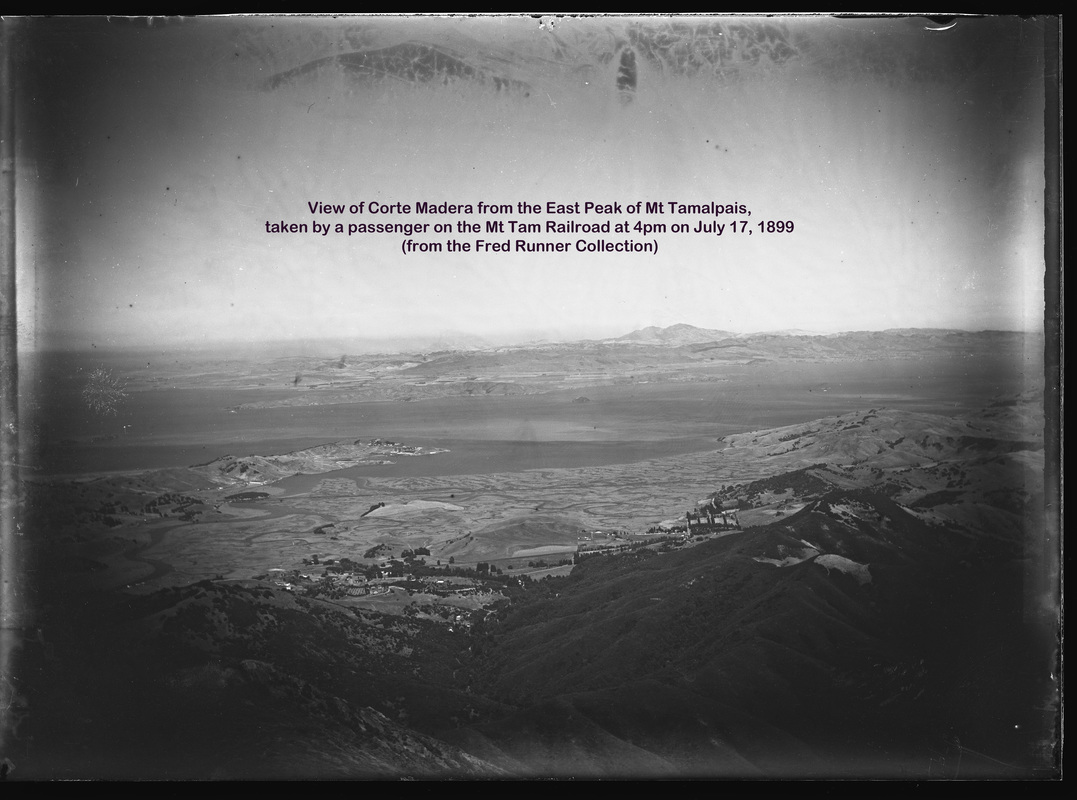 After California became a state in 1851, most lands in Marin that were not confirmed by the State as being legal Mexican land grants were claimed by either homesteaders who  established dairy farms or by speculators who later divided their holdings into tracts and sold them to others.    In the last half of the 19th century, the lands of Rancho Corte Madera del Presidio were largely held by heirs of John Reed, who in 1832 received the first land grant in Marin from the Mexican government, or by James McCue, who  claimed hundreds of acres here in the 1870s and laid out the town's first tracts above the tidelands, or by the family of Captain John von Reynegom, who homesteaded hillside lands  west of the tidelands and whose daughter Amelia married Frank Morrison Pixley.

The Block Book Map below shows the earliest Corte Madera tracts, all on the west half of the current town boundaries.   Here is a list of when each subdivision on this map was recorded by the County of Marin: 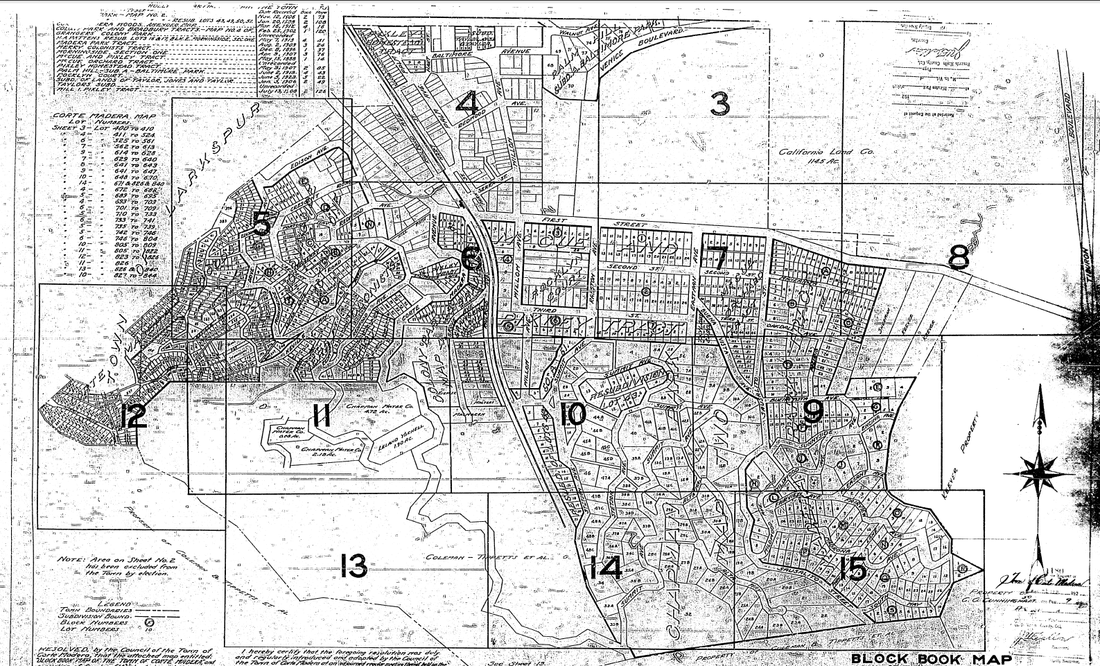 Corte Madera Refuses to Incorporate With Larkspur
SAUSALITO NEWS - 31 August 1907
In response to a call of the Corte Madera Improvement Club for a mass meeting to discuss the proposed Joint incorporation of Larkspur and Corte Madera, over two hundred representative people including a large number of ladies, met ln Tamalpais Hall, Corte Madera, Thursday evening, and after much onesided discussion, they deolded against incorporation. Chairman C. P. Moore called the meeting to order and in the absence of Secretary Chas. F. Stewart, Col. Chas. J. Wall was appointed secretary pro tem. Chairman Moore, opening the meeting said: "A week ago a committee on incorporation of Larkspur composed of leading citizens of Larkspur attended our meeting and stated the question of incorporation of Larkspur would be placed before the voters. They invited Corte Madera to join with them. We thanked them for their kind offer and told them we would call a mass meeting of our citizens to hear their views. A motion appertaining to incorporation is now in order." Mr. Buckley then moved that "We do not annex", which was seconded. Chairman Moore said he would like to hear the views from everyone but that only residents were entitled to vote. Ben Scouler said he would like to hear whether Corte Madera would have the sanitary tax saddled on her by incorporation. There being no member of Larkspur's committee present, Attorney W. H. Mahoney of Larkspur, in response to a call, said he had no connection with or authority from the committee, but was favorable to incorporation. Thought It better to have Escalle, Larkspur and Corte Madera jointly incorporated than having a lot of five cent towns. He doubted whether the selling of Larkspur Sanitary Bonds would be carried through if they were incorporated. He was followed by E. C. Chapman, who is interested in real estate and waterworks at Corte Madera. Chapman said, after giving the matter careful study, was opposed to incorporation with Larkspur at present. Corte Madera had recently expended $25,000 for an excellent sewer system and had heavy enough tax burden to bear. Did not believe in saddling any more. Corte Madera was a respectable, law-abidlng community with only one saloon and does not need police protection. The inaction of Larkspurites is responsible for the number of saloons there. Mr. Chapman said if the Larkspurltes spent as much in saloons as he did (5 cents) they would not exist. He complimented Mrs. Plngree upon the Ladies' Improvement Club securing a porch light rate of 25 cents per month. Amidst hearty cheers be sat down. Dr. James McCue was anti-incorporationist and in the course of his droll remarks he could not refrain from referring to his mutual friend Bradbury. He was followed by Supervisor Rea of San Francisco who said "Leave well enough alone. You are not ready for incorporation. Corte Madera has all good people and good climate and does not need policemen. May the name of Corte Madera exist forever." Hearty cheers. Handsome Jim Broad was another anti. Ben Scouler was the only Corte Madera incorporationist who ventured on the floor. He was out and out for incorporation as he sincerely believed that Corte Madera would have better police protection which was greatly needed. He would vote against incorporation however as he would sooner see it lost here than at the polls. The motlon was unanimously passed by a standing vote and Col. Chas. J. Wall, James Fay, E. C. Chapman, James Broad and Ed. Scouler were appointed a commlttee to wait on the Larkspur Committee. 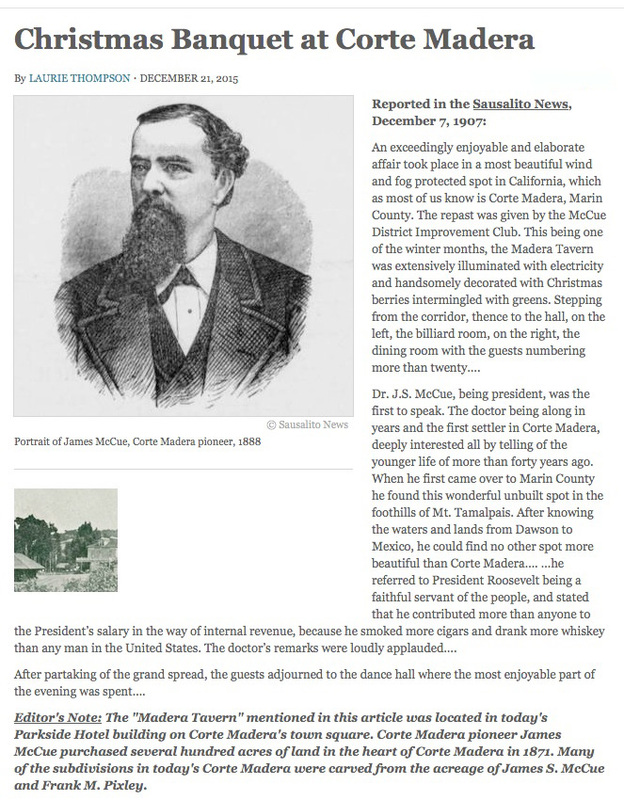