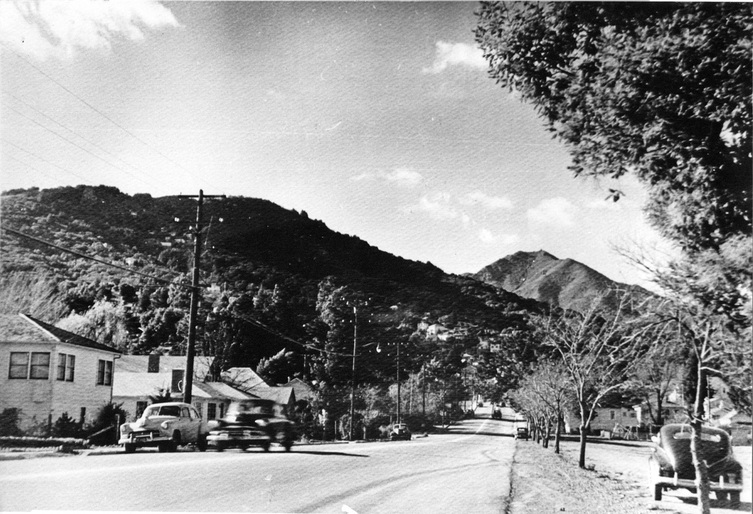 LOOKING WEST ON TAMALPAIS DRIVE IN THE LATE 1940'S

When this part of Corte Madera was laid out by James McCue in the 1870s, he named the streets First, Second, Third, Pixley, Ralston, and Eastman. Those streets are known today as Tamalpais, Manzanita, Oakdale, Willow, Chapman (lower) and Eastman.  The name Pixley was later given to a new street at the edge of the tidelands, where the Post Office is located today.  Until the mid-1960s, the northwest corner of Tamalpais and Pixley was the site of the large Mahood family home.     Next to it was a small gray house where Town Hall was located, since the building at Tamalpais and Willow now known as Town Hall was then occupied by the Volunteer Fire Department, which had built it to house their fire engine in the 1930s.    The old Mahood home was demolished during the 1960s in order to construct the current Public Safety Building there today, and the former fire station was turned over to the Town to become remodeled as Town Hall.      Where the old Town Hall had been, a large parking lot was built to serve staff and visitors to the two municipal buildings on either corner.